Iceland’s geographical position on a divergent plate boundary and on a hot spot in the N-Atlantic ocean, calls for a variety of measurement techniques to observe such a dynamic environment. Many of Iceland’s most active volcanic areas are largely covered by glaciers. In order to detect seismic activity in these areas, IMO has had to overcome several technical challenges and obstacles, such as extreme weather conditions, power generation, snow accumulation and glacier movement. The detection level of the SIL (South Iceland Lowland) seismic network was significantly improved during the FUTUREVOLC[1] supersite project (2012-2016). Due to Iceland’s diverse and challenging environment, IMO has had to develop different kinds of stations to monitor its seismic activity according to each circumstance. 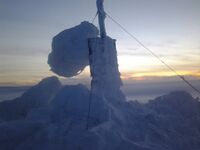 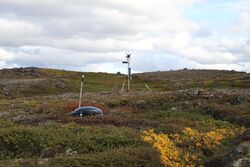 What is a strainmeter? 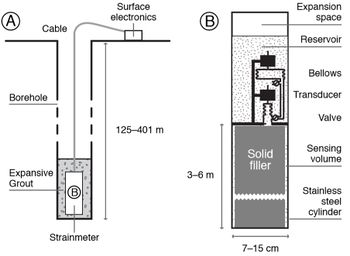 Schematic views of Sacks-Evertson strainmeter: (A) profile view of an installed strainmeter, (B) details of the instrument itself. After Roeloffs and Linde (2007) p. 306

A strainmeter is an oil-lined steel tube, 3-6 m long and 7-15 cm in diameter. It is installed into a borehole (depth ranging between 125-401 m) and an expansive grout is pumped into the borehole alongside the strainmeter, thus “connecting” it to the bedrock. Under compressive strain, silicon oil is expelled from the sensing volume through a narrow tube to an expansion space. Oil from the sensing volume passes through two bellows (B1 & B2) and electromagnetic transducers (DT1 & DT2) are used to measure the movement of these bellows.

A strainmeter is very sensitive and efficient. It records deformation signals at 50 samples per second (sps) and can resolve strain changes as small as 0.002 mm km^-1 (i.e. ~10^-11), making them the optimal instrument for measuring crustal deformation over periods ranging from minutes to months. For decades, a network of “Sacks-Evertson” dilatrometers in South Iceland has been used to observe region-scale crustal deformation caused by strong earthquakes in the south Iceland seismic zone (SISZ). It has proved essential for monitoring volcanic eruptions of Hekla. Strain pulses registered tens of minutes before the 1991 and 2000 eruptions of Hekla enabled public warnings to be issued before each eruption began.

Data from each strain station is beamed in real-time to IMO with radio frequency. The network relies on a single GPS clock-signal at Icelandic Meteorological Office for timing purposes. When communication errors occur, data are lost due to no “data-buffer” at each site and stations cannot be contacted remotely. 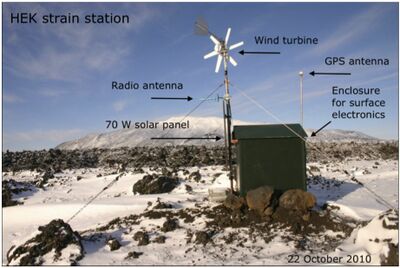 Westward view of the surface enclosure of HEK strainstation. Hekla edifice is in the background. Photo: Matthew J. Roberts

Broadband instruments are placed on nunataks in the Vatnajökull glacier area. The nunatak stations hus (on the outcrops of Húsbóndi- 30 km from Grímsvötn volcano) and ksk (on the outcrops of Kárasker, 40 km E of Grímsvötn) consist of Nanometrics Trillium Compact (120 s) sensor and Centaur digitizers. A 1 m high, robust steel bracket was equipped to hold 4 solar panels (200W Mono Solarpanel, 12V), batteries and communication equipment. The bracket is bolted into the nunatak, and the battery bank along with electronic equipment is installed in an aluminium box. The seismic sensor is in a small vault, a few meters away, either covered by rocks or in a shallow borehole covered with sand to improve local noise conditions. 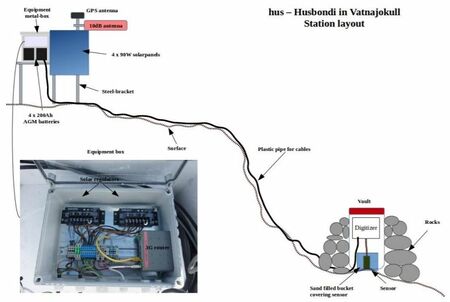 The layout of the setup at seismic station hus. Upper left: The raised bracket with the vertically mounted 360W solar panels, GPS and communication antenna on steel pipes mounted on the frame. The bracket carries the electronic equipment and batteries to power the station during the darkest winter months, when solar energy production is none. To prevent build-up of icing on the GPS and transmission antennae, no wire stakes are used to stabilize them. Lower left: Inside the equipment box, showing the 3G router and regulators for the solar panels. Lower right: The small vault containing the seismometer and digitizer Image from Vogfjord et al., 2017. 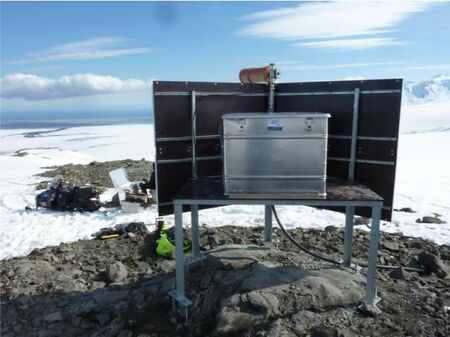 Photo of the setup at station ksk. In the foreground are the solar panels mounted on the frame carrying the batteries and electronic equipment. The frame is raised to protect the equipment from surface melt water. A brown plastic cylinder covers the transmitting antenna to protect it from icing. The brown top of the small plastic vault housing the seismometer and digitizer is seen in the background above the snowmobile. Image from Vogfjord et al., 2017.

Stations in the ice

The development of stations intended to tackle challenges such as extreme weather conditions, power generation, snow accumulation and glacier movement was made through the FUTUREVOLC supersite project (2012-2016). New source inversion techniques were developed and the initial seismic network operations inside the Vatnajökull ice cap were tested. For this purpose, four new stations were installed in the Vatnajökull area; two broadband instruments were placed on nunataks (addressed in a separate chapter) and two glacier broadband seismometers were developed and installed inside the ice. The new glacial seismometers were developed by Güralp Systems Ltd and could be placed into the glacier itself. Main challenges were (i) instrument tilt, due to local melting, (ii) instrument translation due to glacier movement, (iii) an accurate time stamp, even if the GPS time receiver would be covered by snow for some time, (iv) low power consumption, (v) instrument noise. 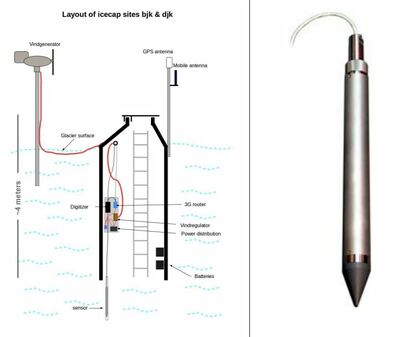 Left) A schematic figure demonstrating the set-up inside the glacier stations BJK and DJK. The equipment is placed inside a barrel, buried 4 m deep into the ice. The seismometers are placed in the ice at the bottom of the vault. (Right) The Güralp "flute" seismometer. Image from Vogfjord et al., 2017
Retrieved from "https://eurovolc.cp.dias.ie/index.php?title=Methodology:_Field_stations_set-up&oldid=384"