The research infrastructures,focused on the study and monitoring of volcanoes and volcanic processes for research and societal benefit, consist of two main categories:

(A) in situ volcano observatories (VOs), with responsibilities for monitoring volcanic activity, forecasting hazards, issuing warnings and alerts to Civil Protection authorities and Volcanic Ash Advisory Centres (VAACs), and informing society when the volcanoes exhibit signs of unrest or imminent eruption. The VOs operate multidisciplinary monitoring and surveillance systems to assess volcanic activity, support decision makers, Civil Protection and aviation authorities at regional-, national-, or international level, and carry out research and technological developments in all fields of volcanology to further their operational goals. The distribution of the VOs is dictated by the location of active volcanoes (see Figure 1), which within Europe are found in Italy, Iceland,Portugal, Spain (Canary Islands), Greece and Norway. Active “European” volcanoes are also found in the European overseas territories of West Indies, Indian- and Pacific oceans (France) and the South Atlantic Ocean (UK). Neighbouring and nearby nations (e.g. Turkey, Syria, Armenia and Iran) also have active volcanoes and would benefit from coordinated European support.

(B) Distributed volcanological research institutions (VRIs), which include universities, agencies, institutes, centers, laboratories and groups that use and produce volcano observations, carry out experiments, modelling and scientific studies to improve the knowledge of volcanological processes and hazards. The VRIs utilize the monitoring data of the VOs and, even though they do not have formal monitoring responsibilities, in some cases they may also operate monitoring programs and systems and provide scientific knowledge and advice. 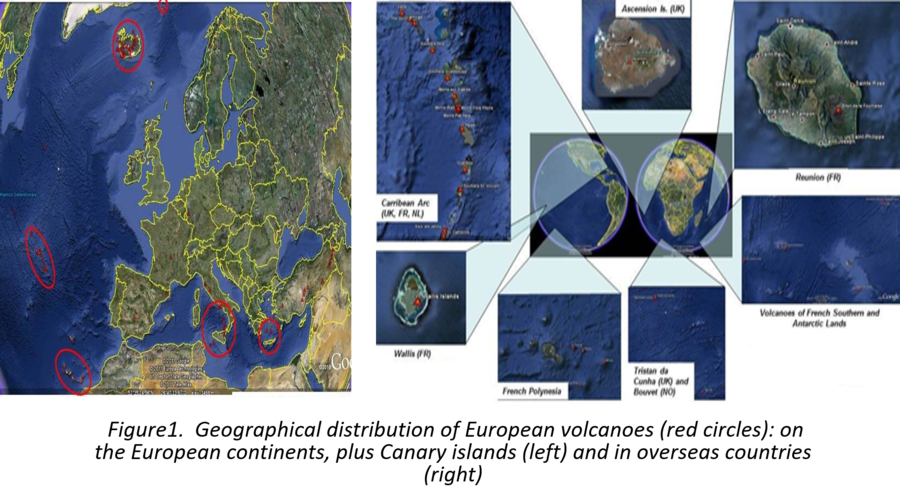